This short tutorial is aiming at walking the user through different input types and options of the Spring Model. For more technical explanation of the fields see the manual.

The easiest thing you can do is just paste the results of a chromatin experiment (in 7-column BEDPE format) into the Genomic Coordinates → Interactions section, set the resolution and run the model on default settings. That is the first thing we will do. Choose Example 2 in the top of the New Request box. Each line of the input is comprised of 7 fields: chromosome on which the first anchor is located, the beginning, than the end coordinate of the first anchor, than the chromosome, beginning and end of the second anchor and the PET count of the interaction. The PET count is ignored in the modeling process and so are chromosome numbers – remember, Spring Model is a tool for modeling chromosome domains, so input containing interchromosomal interactions will be treated as intrachromosomal. Just stick to modeling one chromosome at a time.

Resolution has been automatically set to 2000, which means that 2000 base pairs will be represented as one bead in the model.

Submit. Your task should be completed in a few seconds. Than you can grab the structure in the preview and rotate it in order to view it from different sides, as well as zoom in and out. 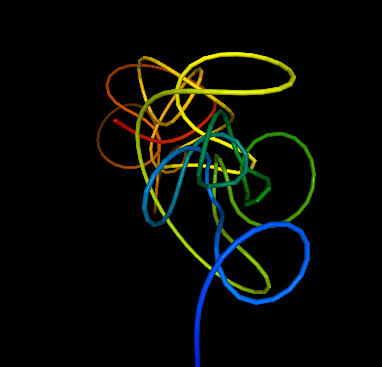 Note that your model probably looks slightly different from ours and that is because, although the interactions are the same, the initial structure was a random walk (self-avoiding random walk to be exact). That means it is created randomly for every model. It provides a structure already resembling how the chromatin is distributed in the nucleus, but it also means you will get a slightly different model every time, because one set of contacts can be satisfied by many different 3D structures. You can always download the initial structure and view it in UCSF Chimera (you can also download the final structure and the interactions that can be displayed in Chimera as pseudo bonds). 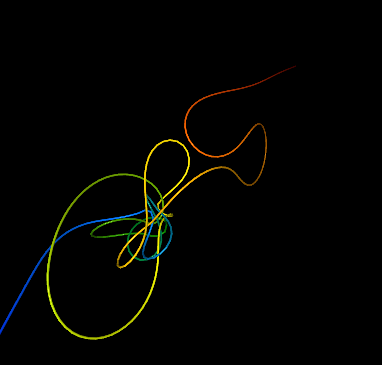 Example 2 with line as the initial structure 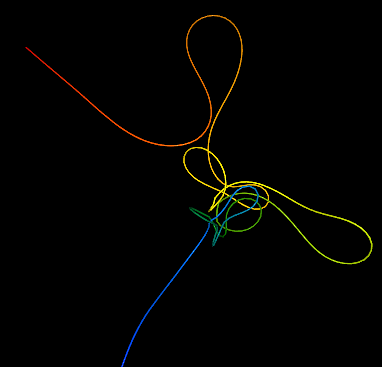 Example 2 with circle as the initial structure

In the example resolution has been set to 2000. Try and experiment with lower and higher resolutions. Remember that very large resolution will give you a short structure, especially it should be much less than the length of the modeled region.

Now that we have covered the basics, we can investigate optional parameters that will give you more control over your model. Let’s go to Example 1 and submit it. 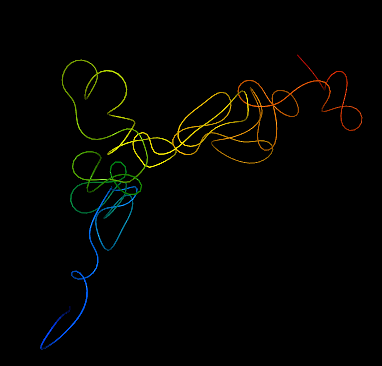 Example 2 with resolution set to 1000 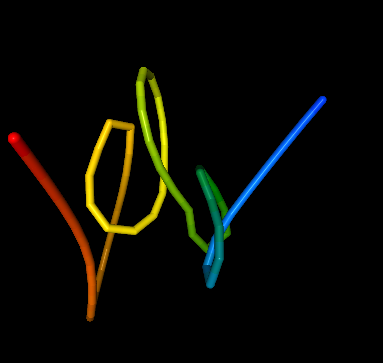 Example 1 uses model coordinates instead of genomic ones. This option is more explicit, the user chooses directly how many beads there will be and which ones are supposed to be connected.

By using any of the two options you can achieve exactly the same results, genomic coordinates are always translated into model coordinates before the building of a model. The middle points between the start and end coordinates of an anchor are taken as the coordinates of an interaction and than those points are scaled based on the region length and resolution. It is mostly the matter of convenience which method is more suitable. 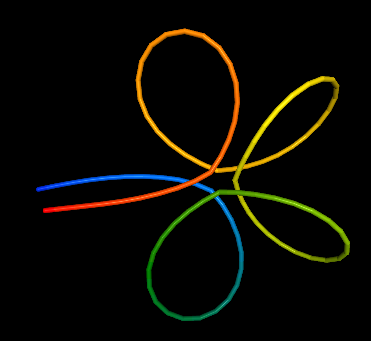 Now go back to the New request form, change stiffness to 0 and submit again. This is the structure without any stiffness-related force. The flower shape is still there, but it looks more collapsed, the Distance map has also changed - some distances are now smaller. If you move the structure around you will also see that the structure is more flat, it resembles more the initial structure which has been a circle.

Go back again and change to stiffness to 100. The structure seems very inflated, it is also very different from the initial structure, because there is a strong force making the fiber more rigid. It is often a good idea to experiment with the stiffness of your model to best cater for your needs and expectations. 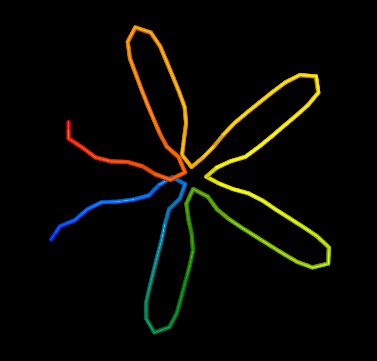 Example 1 with stiffness set to 0 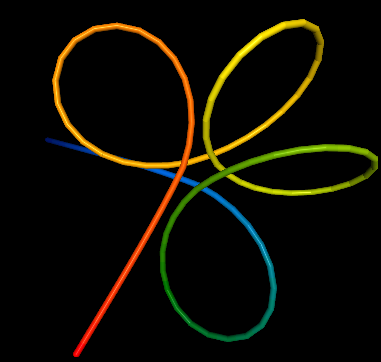 This is an option if you want your model to fit in a certain volume. Let’s set the stiffness back to 10 and set the diameter of the container to 100.

Nothing has really changed because the container is bigger than the model, so it fits there easily without changing the shape. Come back and set the size to 10. The structure has now visibly smaller volume. 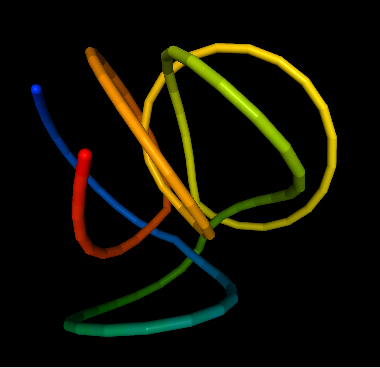 Example 1 in a spherical container

The Spring Model enables enforcing loop types. You can choose an interaction to form a loop of a certain type by adding the loop type symbol in the line defining a contact. The allowed symbols are >>, << and capital H for a hairpin loop and <>, >< and capital S for a stem loop.

Choose Example 3 and see how it works. Than resubmit with the following contacts:

Here you can see clearly the different loop types.

Sometimes certain restraints may produce a model with anomalies. You can try two solutions: either run the model again with the same settings and see if this time it looks correct or you can check the box that says Refinement. In short, refinement helps escaping local energy minimum, but it may take longer time to calculate. See Manual if you want to know exactly how it is achieved. 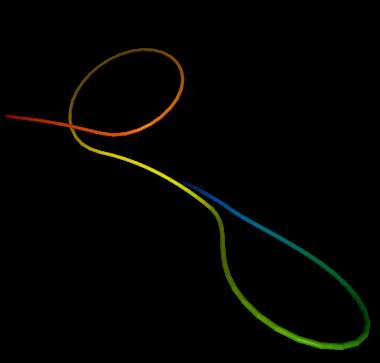 One of the most common type of chromatin interactions data are Hi-C matrices, and they are usually stored in binary hic files. Here we show example of possible way (but not the only one valid) how to transform hic matrix into model coordinates.

Let assume that we are interested with region of chromatin given by following heatmap and let assume that this heatmap represents region chrN:1'000'001-1'030'000 (i.e 300 kbp length) and it's resolution is 10kbp. (It is artificially generated heatmap, and example is intentionally simplified). 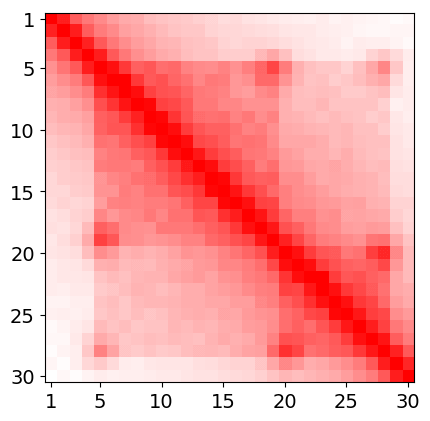 In this example every bin in heatmap will correspond one-to-one to model beads. Thus heatmap resolution - 10kbp will also be a model resolution - every bead represents 10kbp. First bead corresponds to region chrN:1000001-1001000, second to chrN:1001001-1002000, third to chrN:1002001-1003000, and so on... Model will have 30 beads in this example. One of input method in spring model is using model coordinates - beads indexes or in other words indexes of heatmap bins after renumbering (first bin is at the beginning of region of interests, not the begin of chromosome). What we need to do is to find relevant interactions in heatmap and then translate their genomic coords into model coords.

Hi-C heatmaps are usually very dense in comparision to ChIA-PET. We can not simply take all non-zeros from heatmap because there will be to much interactions, and the model will collapse. Moreover Spring Model treats interactions as binary. They exist or not. We need to somehow make a loop-calling. The description of this procedure is out of the scope of this tutorial so we will perform the simplest possible approach, we will just choose the peaks from heatmap. In our case there are two loops that are additionally connected with higher order interaction. So in this very case it will be following model coordinates:

They can be directly pasted in model coordinates field. Remember also to fill number of beads field with 30.

Convenient way to extract interactions from relatively short regions from hic files is to use this python script.

Interactions from experiment ChIA-PET are usually stored in BEDPE files. Spring model allows direct pasting interactions saved in BEDPE file, however there are some extra requirements. They should have 7 columns. Columns 1-3 and 4-5 describes two anchors of loop, chromosome id, begin, end. Chromosomes ids should be identical in both anchors. The last column is for PET-Count. Spring Model does not use PET-Count. SM treat interactions binary. Under the hood SM calculates midpoints of anchors and then translating genomic positions into model coordinates according to formula: (x - begin of modelling region) / resolution

You can easily filter your data using awk oneliner below.

where ($7 > 9) mean that we expect column 7-th to be greater than 9. Analogous method can be used for other types of experiments saved in BEDPE file.